Slywire is one of the season two Spectral Knights which never made it to retail. For me Slywire’s design epitomises the season two characters, with the mixture of fantasy and technology. He was set to feature a vary garish colour scheme, red and orange, and featured one of the new two-part shields (I’ll explain that a little later).

On the toy page for Slywire on The Visionaries.net features the only images of Slywire’s toy previously seen as well as the Neil Adam’s artwork (which shows off his totem power). On top of these previously seen images are several high-resolution photographs of the resin 2-up hardcopy of the shield. Like with my previous reviews of Kabor and Lazorlash I will mainly be focusing on the shield, but at first let’s look at the action figure.

Slywire’s design reminds me of a Visionaries comic character Tech-Colonel Ragni Fisel, and the other tech-scientists with whom he worked, He features a grey helmet with a built in communications device *which does not make any sense in a world where technology no longer works, and (if made half size) would work as a nice helmet for several GI Joe communication officers, His design is quite interesting as he features very square boots, and a few straight angles on is forearms, legs and chest. He has quite a lot of detail on his legs (against it fits in well with some of the later released GI Joe figures (during the 90’s).

As previously mentioned Slywire has a very bright colour scheme, Bright Orange, Red, Dark Orange, Pink and Grey. In many ways his colours look more like that of a test-shot than a final figure (or a 90’s released GI Joe toy). He has a brown moustache and brown hair. On the box art Slywire is shown to contain several tools within his boot (showing that he would most likely be a mechanic of some sort)

Slywire appears to come with a gun which (potentially) doubles up as a crowbar. He has a large silver shield which is made up of two parts (the upper section contained the hologram whilst the lower piece was made up of sculpted detail.

Slywire’s chest hologram (totem) is shown in great detail on the Neil Adams artwork. His power is that of some sort of Cyborg / Cybernetically Enhanced Human. It reminds me a little of Marvel’s Modok character, and you could see Slywire fitting into A.I.M quite well.

Slywire’s shield hologram is not very clear, on the catalogue scan, but appears to be something like a two headed hydra. The packaging are is clearer, but I am still left unsure on what the shield’s power is. Clearly the creature, or creatures, on the hologram had two heads (whether this is one or two creatures it is unsure. For my review we will refer to this as a single creature with two heads. The creature appears to be firing something which resembles maces, or explosions. This, combined with the very unusual chest totem, leaves Slywire as one of those Season Two characters who just doesn’t seem to fit in the world which we know of as The Visionaries. I would love to know more about the design / intended character of Slywire.

The first thing to comment on is the working name for Slywire, as noted on the label attached to the field, Fred. The information on the tag reads VIS (Visionaries) S.K. Fred (Spectral Knight Fred), #704134-24m (the serial number for the character), 6-30-87 (the date of the work, 30th April 1987)
br /> Slywire’s shield, as previous mentioned, is made up of two sections which clip together. The final released toy would probably also have come packaged in parts, due to the shape which the shield makes. The top section of the shield holds the hologram on the front, although the back is far more interesting. Highlighted in some of the photographs we have taken, you will notice that there are two slots and a hole (which looks a little like a screw hole) on a nice bit of 3D detail sculpted into the back.

The front of the shield faces circle with a cross in the middle (on the top) and some nice curves edging on the outside. On these curves are some small circles with crosses on the inside (looking a little like cogs). At the top of the shield are also eight pipes.

The top section clips into the lower section via two rectangular slots. The top of the lower section has some amazing details, but I will first focus on the previously unseen back. The back is smooth with some grooves and ridges from the sculpting process, which remind me of hieroglyphs.
The front of the lower section of Slywire’s shield has some amazing detail carved into it, from the central ridge piece (looking a little like an engine cover) to the grills on either side as well as the two coils. The shield has two angulated handles on the lower portion, although one of them is broken on the hard copy. This would have made the shield quite awkward for Slywire to hold, although he could also hold it two handed 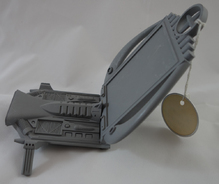 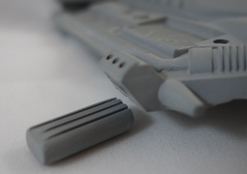 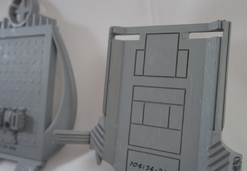 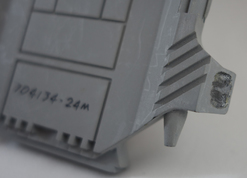 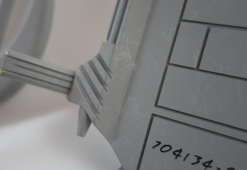 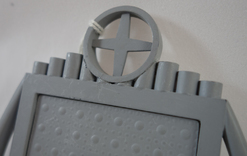 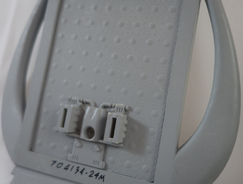 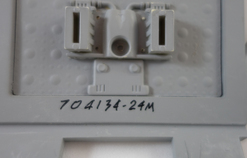 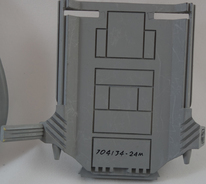 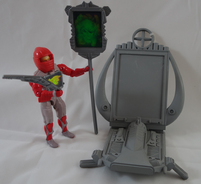 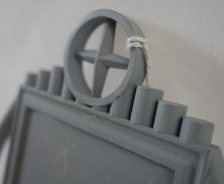 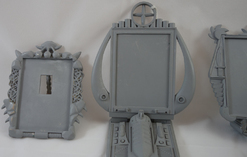 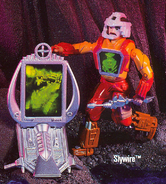