Draw upon the breath of stars, And scorch the skies with fiery scars!

Draw upon the breath of stars, And scorch the skies with fiery scars!

Magical Rhyme: "Draw upon the breath of stars, And scorch the skies with fiery scars!"

Feryl comes with the Capture Chariot, the second largest of the Visionaries vehicles from series one and the largest of the Spectral Knights. Our original Feryl toy has become very loose on the left bicep, which is starting to now separate. His character wasn't really established that much, other than being one of the younger Spectral Knights who suffered from confidence issues.

Feryl's colour scheme is a sandy yellow and brown, and the design has lots of straight lines and angles to it. His helmet is a bucket design with a chin strap which is quiet thick and blocks out part of his lips. The helmet is also a little wide at the lower sections. Feryl has quiet square shoulder pads and has one of the more limited shoulder rotations.

Feryl's weapon is an electric tazer made from grey plastic and is a decent resemblance to the cartoon series. His animal totem is a wolf and his hologram is a side on shot with the head. In my opinion it's one of the poorest of the Visionaries holograms. Feryl's hip joints mean that his legs are always at a slight sitting angle which means he can't stand up straight. 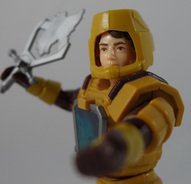 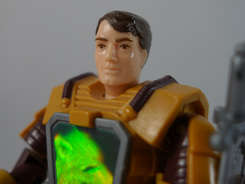 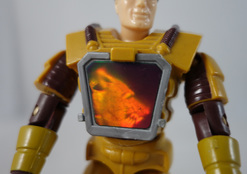