Magical Rhyme: "The arrows turn, the swords rebel, may nothing pierce this mortal shell!"

Lexor is the only Darkling Lord figure which was released, in series one, with a hole for the visor rather than having plastic moulded across it. Some of the prototypes of the other figures also included the gap but they were dropped for the final released product.
Lexor’s colour scheme is that of a traditional hero character, red and blue, but with an interesting mix of the two colours. Lexor’s armour is similar to that of an old knights’ plate mail, in some ways. He has knee padding moulded on the figure, a little like the Crimson Twins in GI-Joe (Tomax and Xamot). His legs has various ridges and plates moulder on to it. His upper body is less detailed, but still nicely designed. He has shoulder plate at a 45 degree angle, which limits the figure from full 260 degree rotation but isn’t fully restrictive. An interesting piece of the Lexor figure (like many of the Visionaries figures) is that the pins used on the toys have been coloured to blend them in to eh plastic, rather than being left as plain silver. On Lexor’s case this is clear on his arms where he has both blue and red coloured pins.
Lexor’s hair and eyes are red in colour, which looks really odd.

Lexor’s helmet is made from quiet a thick plastic, and the eye-holes are slightly too high, meaning that you can see Lexor’s eyebrows, but not his eyes. This is really annoying and also really poor design, as it would be quiet obvious that the scale was not quite right.

Lexor’s weapon is a dual hook weapon, something that looks rather pathetic, although if used as a knuckleduster then it would be quiet painful.
The hologram on Lexor’s chest, the armadillo, is rather strange looking and looks a little skewed. His staff features the head of protection, in a really nice piece of holography. Unfortunately we’ve lost out loose version of the staff. 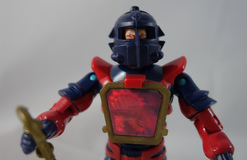 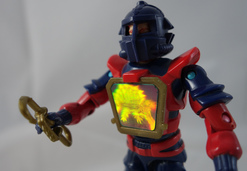 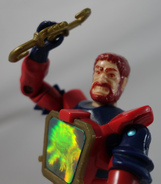 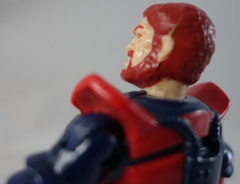 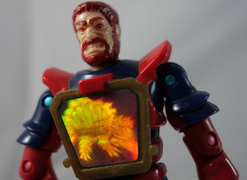 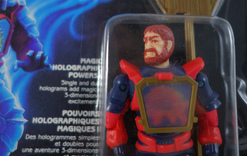