Cravex, voiced by Chris Latta, was a money hungry, selfish, Darkling Lord who carried on the theme of Darkling Lords having beards. Cravex was also the first (and only released) Visionaries character to feature black hair.
The toy of Cravex is a really nice representation of the cartoon and comic character. Featuring the instantly recognisable black and red colour scheme, Cravex’s toy looks better than it plays (due to limitations on the articulation which I’ll cover later). Cravex’s helmet is, in my opinion, the best of the series 1 Darkling Lords and one of the better helmets, scale wise, of the line. The helmet has a knight looking design, which includes a space for Cravex’s mouth.
The sculpting on Cravex’s shoulders are deigned to look like talons from the Phylot, Cravex’s animal totem. The same design is also used on the top of Cravex’s helmet. Cravex’s arms and legs feature chain mail scales on the red areas, adding to the knight feel of this figure. Cravex has some interesting sculpting around the knees, a little like Witterquick.
It’s not all positive with the sculpting for Cravex though, the large, thick, shoulder pads means that Cravex struggles to life his arms to 90 degrees, with the limit probably around 60 degrees.

Cravex’s weapons is a Scythe, though our loose figure is missing it, sculpted out of gold plastic. The positive things for the Darkling Lords is that their gold plastic does not suffer from the gold plastic syndrome.
The sculpting on Cravex’s staff is really nice, having one of the largest face plates of all the staffs. The twin pincers at the top of the staff are really nicely designed, and give the staff a regal appearance. 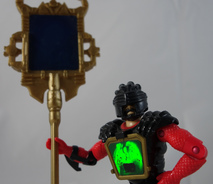 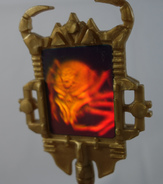 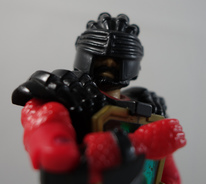 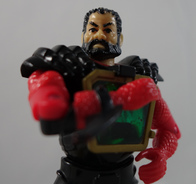 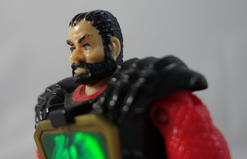 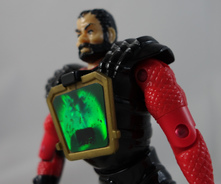