Malitor is one of the Season Two Spectral Knights who did not make it to retail stores when the line came to a premature end in 1987. Neither of us owns the figure, at present, so all references to the main toy itself will be based on the images contained with the infamous Toy Fair magazines. Whilst this is true for the figure, we do own the 2-Up Resin Hardcopies of both of Malitors weapons, that is his gun and shield. As such this review will focus on those pieces.

The 2-Up is a resin hardcopy which has been painted grey and is often referred to as “grey prototype” by collectors.

During the concept and design process for the second season characters the character who would go on to become Malitor was originally going to be called Elephanix. This pre-production name can be found written onto the 2-Up hardcopy weapons as well as on a piece of A4 paper containing a very early piece of concept art for the character. We do not own this piece of artwork, but you can find a low resolution copy contained within the image gallery. If you are reading this and are the owner of the paperwork please get in touch with us at info@thevisionaries.net as we would very much like to speak to you regarding this document and the others that were sold with it.

In his original design the tusks of the elephant are prominent on the characters helmet as are his stocky legs and oversized feet.

During the design process the helmet was dramatically changed, as is evident when you compare it against the version worn by the toy as shown within the Toy Fair catalogue. If you look closely you will notice most of the design elements on the legs and feet within the early sketch were kept for the final figure, though the scale was improved to be more realistic.

Due to the size of Malitor’s weapons, as well as how he is holding them within the toy fair images, it is difficult to compare how closely the torso design matches to the original concept art.

It’s quite interesting to look at the 2-Up of Malitor’s shield as it helps to highlight a lot of the detail that is missing or difficult to make out within the magazine. Other than the large central area that would house the hologram, the shield has a rounded profile theme with an ornate top which, at the increased size, looks almost like something you would find in a religious establishment. The top two corners are etched with a mesh design which gives the piece both detail and texture. If you use your imagination a little, it is not too difficult to see how the top sides of the shield are designed to resemble ears of an elephant, thus in keeping with the characters concept and name. The top pieces also have holes sculpted into them with what leaves behind a hexagon shape which is sadly lost when the shield is reduced and then cast in plastic as it ends up looking more like a divot than anything else. You will notice that the hexagon theme continues around the shield where 7 more can be spotted along the outer frame of the hologram area. There are two at the top left, two on top, two at the bottom right and on one the middle right where the side handle can be found.

The detail on the bottom of the shield is retained fairly well in the finalised scaled-down version, though much like the top, the indentations are much deeper and the detailing more obvious at scale and on the Hardcopy as you would expect. The four “poll” like pieces on the bottom edge are probably support to represent teeth of some sort with the left and right bottom edges representing elephant tusks.

One of the things that may not be noticeable at first is that Malitors shield is a little on the large size, even when compared to some of the other 2-Up shields we have documented. If you look at the photographs within the gallery you will notice that it’s approximately 1¼ times the size of Kabor’s shield, though this is due to the large exterior.

Sadly the 2-up pictured within this review has a broken top section. This probably happened many years ago due to poor storage, though if you look at the images you will notice that the break is fairly clean.

One of the benefits of having the shield in hand is that we can document, for the first time, what the back of the shield looks like. In Malitors case you will notice that there texture pattern used on the top corners on the front have also been used on the rear of the shield. Other than that, the back contains some grooved slots, four holds and a little half circle grove at the top. Having texture on the back is interesting as it would not normally be seen. You can also notice the production number and tooling reference 704117-19M clearly marked on the bottom of the shield.

Notice how there is no sign of how a handle would attach to the back unless there as some sort of bar was made / planned that would attach to the four holes on the back and then hook onto the one at the top forming an upside down T. We own nothing to suggest that this was the case and it’s made further unlikely if you take the Toy Fair image as Malitor holds the shield by holding the gun with his right hand, with the gun taking the weight of the shield once it is attached, and his left hand it used to hold/balance on the side handle. This suggests that it is more likely that the plan was to have Malitor hole the shield like this when it is in its combined form, but for him to fip the shield onto its side so that he could hold the handle with the shield then resembling an oversized mallet. It would have looked odd and is just a theory at this stage as we have no paperwork to support it.

Like some of the other series two figures, Malitors gun can attach to his shield to make a “super weapon”. In this case they attach together by plugging the pegs on his gun into slots in the shield.

The 2nd series of figures introduced more advanced technology back into the line which is highlighted by the introduction of handheld guns, something that would have been out of place within series 1. Malitor’s gun is certainly pretty detailed and would not look out of place within a line of space adventure action figures. The gun combines various shapes and certainly has that laser gun looking effect. A lot of the detail would not be as visible once the piece is scaled down, so it is nice to have the opportunity to photograph the 2-Up which highlights the excellent sculpting work which went into this piece. If you look at the images of the gun on its side, there is a star shape sculpted into the centre of the circle pieces as well as detail just behind the grip. The gun would still be a fair size when scaled down and the plan was for it to be finished off in the Spectral Knight Silver colour scheme. Having a projectile weapon does raise the question as to what power his shield would have had. In the past projectiles were often restricted to the magical abilities (fire balls, etc) and it doesn’t really fit with the Elephant theme we associate with the character. 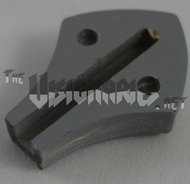 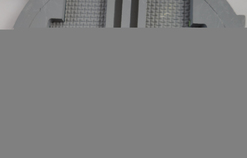 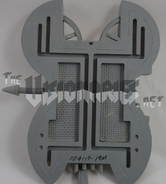 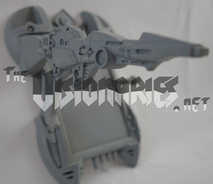 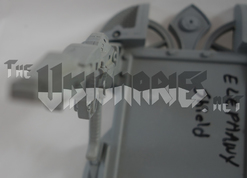 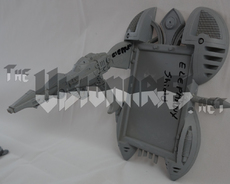 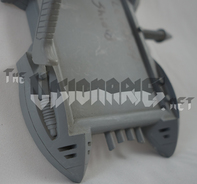 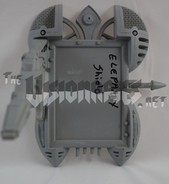 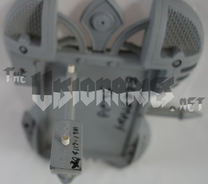 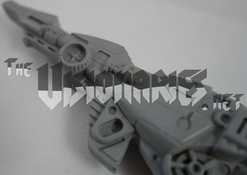 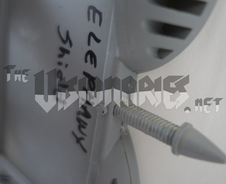 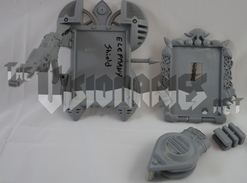 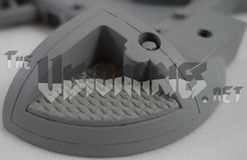 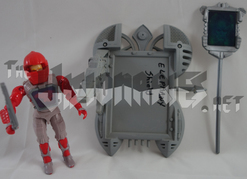 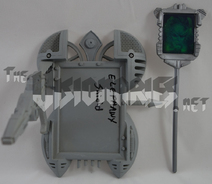