We see Prysmos in its age of technological wonder. Elaborate looking science fiction like cities sit between mountains and low level fliers fill the skies above New Valarak. Merklynn enters the Iron Mountain Diner restaurant in the mountains above the city to witness the end of the Age of Science, and more importantly the beginning of the second Age of Magic. As the restaurant falls, as it is unable to support itself on the mountain side without machinery, Merklynn teleports everyone to safety below. Merklynn declares to all gathered that their only hope for survival is to create a brave new world out of the old one before he promises to return.

The entire planet is thrown into chaos as the laws of science as broken and machines no longer function. The implications of this new age become instantly recognisable from the obvious devastation as machines explode, vehicles crash and so forth right down to the lack of communications and no power. The cities descend into violence as people revert to a barbaric nature to stay alive.

From the ashes of the old society several people band together and form groups of knights, forging armour from the old machinery and train together to hone their battle skills. We immediately see Darkstorm, Mordredd and Reekon successfully capturing people as slaves. They are only saved by the timely arrival of Leoric, Feryl and Ectar. Merklynn appears in the midst of the battle and summons the knights to Iron Mountain near New Valarak promising them power if they journey there in fourteen days. In this surprise revelation Darkstorm and his men make good their escape. Darkstorm returns to his domain and declares himself the rightful leader of Prysmos, citing they need a leader with strength and determination. To this end he decides they will investigate Merklynn offer. Mordredd readily agrees with his master, as always, Reekon seems indifferent. Meanwhile Leoric has second thoughts about Merklynn and his offer but reluctantly decides that if they are to stand against Darkstorm they must go. Unknown to Leoric and his knights, Cravex listens in and learns of Merklynn's offer.

Fourteen days pass and knights from far and wide journey to Iron Mountain. Merklynn's face forms on the side of the mountain out of stone and challenges them to find his private chamber within with a warning that only the strong of will and vision can hope to succeed. Leoric leads the knights in with a heroic speech.

We meet Galadria first off as she outwits the first trap, her fellow (generic) knights falling prey to a giant stone mouth. As the three knights are ejected from the mountain Merklynn encourages them to try again but they leave, Merklynn being highly amused by this. Six other knights, one being Witterquick, enter through another cave but come to a tunnel of moving blades. The other five knights turn back even though Witterquick made it.

Elsewhere Darkstorm, Mordredd and Reekon cross a rope bridge but cut it when on the other side, sending three knights down into the crevice below, one being Arzon. They try to scale up the side of the hanging rope bridge to escape but it turns to snakes. Narrowly escaping, Arzon uses some large leaves growing on the crevice side to create makeshift wings and soar ahead of Darkstorm's group.

Later Darkstorm and his knights hear Leoric, Feryl and Ectar approaching. Mordredd pretends to be a knight is distress and calls them down a tunnel allowing Darkstorm and Reekon to get ahead. In an infrequently seen act Mordredd challenges all three heroic knights to battle but then runs as Darkstorm calls him. Leoric and his men give chase but stumble into a chamber with a huge sleeping stone gargoyle in it. Mordredd throws a rock to wake the creature up before making good his escape. As the knights flee for the exit Reekon traps them by dropping a portcullis over the escape. Feryl and Ectar begin exchanging goodbyes but Leoric is quick to turn on the gargoyle with a brave berserker change. The huge monster actually turns away and flees with some comical yipe yipe noises, Ectar remarking he used to deal with bullies the same way when he was a kid.

Further ahead Darkstorm's group have become separated in the dark and winding tunnels. Darkstorm lights a match and investigates a skeleton chained up on the wall, only for the creature to come to life and blow the match out and kick him down a pit. Using his strength Darkstorm braces himself on the pit walls he begins the climb up, vowing the break every bone in the skeleton's body three times.

Elsewhere in the mountain Galadria is carefully making her way across a tiny walkway beam that runs over a lake. Sneakily Virulina tries to attack her from behind only for Galadria to spectacularly duck at the last second. Some brief verbal sparring follows before Virulina knocks them both into the water. A giant octopus moves to attack the pair, Virulina turning tail and fleeing through an outlet tunnel. Galadria accidentally stumbles across a lever that drains the lake and saves her from a grisly fate. As she regains her composure she vows that she and Virulina will meet again. In another part of the mountain Cravex drops three killer bee hives on some knights, forcing them to flee. As he remarks to himself on their incompetence he claims their dropped weapons for himself.

In an icy cave Cindarr and Cryotek in the midst of a battle, instantly we get an indication they are old enemies and rivals through their banter and quips. Cindarr scales an ice wall and strikes some huge icicles, making them wall and bury his foe. With a burst of strength Cryotek erupts from the pile of ice, again using his agility Cindarr flees from the berserker Cryotek. Cryotek cries out after Cindarr that the next time they meet only one of them will survive.

Elsewhere Feryl leads Leoric and Ectar through the tunnels into a chamber of golden statues. Ectar narrowly saves them a grisly fate as he warns them of an ambush by Darkstorm and his dark knights. Ectar names them as Darkling Lords for the first time as he launches himself into battle. Cryotek, Galadria, Arzon and Witterquick arrive and immediately jump in to help Leoric and his knights. Galadria remarks she didn't see Virulina amongst the Darkling Lords. Lexor shows his cowardice as he hides in the battle, ducking behind a golden statue. Virulina arrives just in time as Merklynn's face appears on the great wooden doors to his chamber and orders them to cease battle. Merklynn tells them that they will now face their greatest challenge, Arzon and Darkstorm immediately voicing everyone's concerns that it might be another trick of the wizard. Merklynn leavers them by saying the choice is theirs.

Leoric goes to enter but Darkstorm insists they enter together. Within the chamber great surges of magical energy fly about, some containing images that will soon become familiar. The knights think they have confronted demons but again Leoric shows courage and leads them on. Galadria thoughts show us she is proud to follow Leoric, Darkstorm questioning that if Leoric is a fool what is he to follow him.

They find Merklynn standing over his magical orb, congratulating the knights form passing through the maelstrom of magical spirits. Some of the knights who had never seen him in person before ask him who he is; Merklynn introduces himself as Magic Incarnate. He reveals the first Age of Magic, a time when men farmed and did not rely on machinery. knights roamed the land the best of these dabbled in mystic arts and became Mages of Prysmos. Only the greatest Wizards foretold of the end of the Age of Magic and secluded themselves away much as Merklynn said he himself did. He declares the knights as Visionaries, giving each their totems as a reward. The wizard warns them that the totems are like emotions and may be uncontrollable. It is Witterquick who questions the point of having magic totems they cant control. Merklynn says there is more and orders the knights to dip their staffs into the Mystical Pool. The pool gives the staffs powers that befit their owners. Reekon and Virulina challenge Merklynn for favouring those with staffs but he promises in time that they too will possess great power. Tiring of the knights Merklynn transports them to outside Iron Mountain with grim words that the fate of Prysmos is now in their hands. 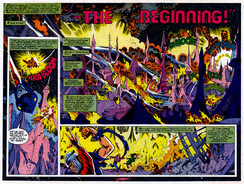