Magical Rhyme: "A whim, a thought, and more is sought, awake my mind, thy will be wrought!"

ARZON... a daring, young knight whose soaring ideals and heroism help carry on the struggle against the Darkling Lords!

Mystical Personality... represented by the EAGLE, Arzon's bold defense against the Darkling Lords is highly effective!

For me, Arzon is one of the iconic Visionaries characters, in terms of look, from series one. The second in command of the Spectral Knights, and son of King Tazlon, there is more to Arzon's character then first appears. On the surface he can be a bit brash and stuck up, but the untold truth is that he is of noble blood (A Prince of Prysmos) and you could therefore understand his character a little more.
The toy of Arzon makes for quiet a striking figure, especially when holding his power staff. The two tone blue colour scheme is instantly recognisable as being a hero (good-guy) from a series created in the 90's (where red, white and blue were the colours of choice). His helmet design makes for a pretty standard, realistic design, and it fits pretty well on the toy. Whilst some of the other Visionaries figures suffer with soft rubber helmets (Leoric), helmets that appear to be made from plastic which is too thick or just don't fir properly, Arzon's is pretty much perfect.
Arzon's power staff, which holds within it the Bearer of Knowledge, is (in my opinion) the nicest looking of the series one Spectral Knights. It's zig-zag design lightning bolt design probably wouldn't be allowed with modern day safety laws (those edges are far to sharp and would have to be rounded). His four-pointed dagger is a let down, it looks more like a toilet-brush than a weapon. At the time of writing this we've lost the weapon of our original figure (loose) and only have our carded Canadian version.

That's enough about the design, lets look at the toy itself. The Visionaries figures are based on bucks which are basically two-ups of the GI-Joe bucks, featuring the same 12 point articulation as their Real American Hero cousins. They also feature the famous O-Ring (rubber band) at their core - something that stretches and rots over time. The O-Ring and 12 point articulation base gave the figures great articulation (for the time), articulation which only a handful of lines during the 90's bettered, and only in the 21st century did some lines finally surpass this.
Depending on the design of the characters armour, the amount of articulation varied. Arzon's shoulder armour features fairly large coverings for his shoulders, which limits the movement of the arm (in the 180 degree rotation). This means that Arzon struggles to reach above his head, limiting the poses you can put the figure in. The sculpt for the shoulder protection is actually larger than how it appears in the cartoon series. His legs have no such limitations.

Lets talk holograms, the in thing during 1987, and amazing pieces of art. The Visionaries holograms were mainly created by the extremely talented Bill Merklein and David Dann (the latter the man responsible for the hologram on VISA cards and many of the Series 1 and 2 staffs). Production of holograms is an incredible engineering achievement, this is further emphasised when you learn that the models are sculpting on a one-to-one scale and more often than not with the naked eye. David Dann told us that he could not get on with sculpting through a magnifying glass, even when working on the VISA hologram. Just an incredible skill and something that many people will not really appreciate. Anyway Arzon features three holography sculpts, the eagle (chest totem), unicorn (Spectral Knights symbol) and the Bearer of Knowledge. The eagle hologram is nicely done, and shaped, to fill the majority of Arzon's chest plate. Our original version (loose photographs) is still in pretty good condition. His powerstaff features the Spectral Knight unicorn and the Bearer of Knowledge (one of the more regularly used powers). The Bearer is sculpted to be beaming out of the staff, like he does in the cartoon series, in a Superman pose. Once again the Bearer fills up most of the staff, which is nice.

The sculpt of Arzon is a pretty good likeness to the design of the cartoon series, showing that both must be fairly close to the original concept drawings (probably done by Neal Adam, although I cannot confirm that at the point of writing this). Arzon's face however differs from the cartoon design in a few ways and is more close to the comic version. The cartoon design of Arzon has a square, chiselled chin, where as the toy has a longer, rounder chin with an obvious dimple in the middle.

Arzon is blue ... what's more to say? Lots actually, I just need to write it up. 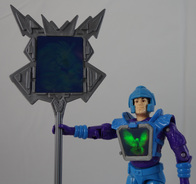 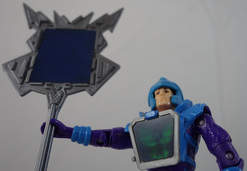 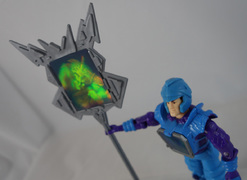 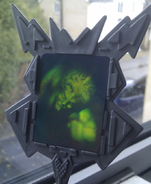 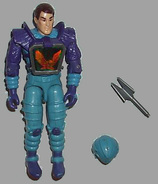