Three suns aligned, pour fourth their light and fill the archer's bow with might!"

Three suns aligned, pour fourth their light and fill the archer's bow with might!"

Magical Rhyme: "Three suns aligned, pour fourth their light and fill the archer's bow with might!""

Cryotek is the 'old man' of the Spectral Knights, but he was always my favourite back in the day (mainly due to his power, the Archer). Cryotek features two of the 80's standard 'good-guy colours' being red and blue, and as always is works well. Cryotek is the tallest and bulkiest of the Spectral Knights, yet this isn't really represented in the toy. The Cryotek figures arms are thin, though the biceps are sculpted, the figure should be larger. The GI-Joe range managed to do this with toys like Road Pig, Gnawgehyde and Zanzibar, but Hasbro decided to not so this way with Cryotek (OK the character wasn't ripped in the cartoon or comic, but the toy should be a bit more meaty to signify his power of strength).

Cryotek's design is an interesting one, there is quiet a bit of detail, mainly in the forms of wires and hydraulics, though the figure is fairly tightly sculpted against the main body (buck). The toy is made out of red plastic and then painted red, so over time the blue paint starts to flake (where the toy has been played with). This is noticeable in the pictures of our original loose figure.
Cryotek's helmet is one of those in the series one Visionaries line which doesn't quite fit properly. Although the helmet fits the figure, the sides of the helmet, by the checks, are pushed out. The helmet also seems slightly short and too thick for Cryotek's head (especially when compared to Arzon, who's helmet seems much more in scale). Cryotek comes with a Triple-Headed Mace molded out of grey plastic, which is nice but seems a little small in size.
Cryotek's shoulder articulation is slightly limited by the small shoulder plates that sit over the shoulders, but the figure has probably 120 degrees of rotation. Conversely to Arzon, Cryotek's cartoon design features larger shoulder plates than the toy where as Arzon's are the opposite.

Cryotek's three holograms are the face of a grizzly bear (chest totem), unicorn (Spectral Knights faction symbol) and the archer. The grizzly's face fills the entire chest plate, and is one of many of the Knights of the Magical Light who's animal totem is represented by a face rather than the entire animal. The archer is a nice design, aiming his arrow down down, although the angle of the bow and it's string looks a little awkward. Our original Cryotek toy features the staffs hologram sticker stuck on the back of the staff rather than the front. You can tell this due to the copyright details on the staff.

Cryotek's facial design is fairly close to the design used on the cartoon series (other than the hairstyle, something that is often awkward to do, especially in that era). Overall Cryotek's toy features a decent amount of articulation, a design close to the animated version and although could be a little large is a fair likeness. 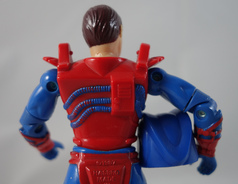 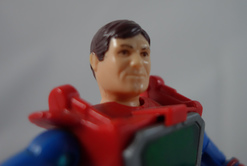 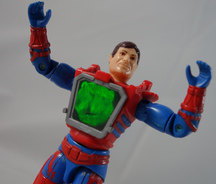 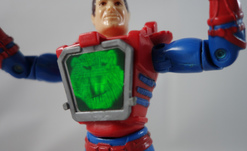 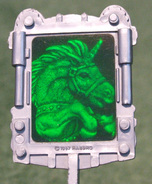