Magical Rhyme: "Whispered secrets of a shattered ages, I summon you renew this sage!"

Leoric, Mr Visionaries, leader of the Spectral Knights and a toy with a moustache. Why is that important, simply because it is pretty rare for an action figure at that time (not a first, but most toys, heroes especially, are clean shaven)
Leoric was voiced by Neil Ross, and he has a little bit of a resemblance to the character (as well has having nothing but positive memories of the show). As the leader of the Spectral Knights you would expect Leoric to be the main character to appear on Visionaries merchandise, though that honour often fell to Cryotek (probably due to the fact that the Archer was pretty darn cool looking).

Leoric features two colours, light blue and a turquoise green colour ... a colour which can be quiet awkward to photograph. He has a very interesting design on his mould where his armour is in the same shape as his staff, a unique feature within the Visionaries’ line. The moulding works well in terms of articulation, giving Leoric completed 360 rotation at the shoulder. His shoulders slightly protrude forcing the arms wider at the top.
The second part feature of Leoric's design is one of studded belts which appear on his thighs, biceps and elbows. The design has a slight S&M / Bondage feel, though luckily the designers decided to colour them completely blue rather than black with silver studs, which would have looked a little dodgy.
The strangest feature of the Leoric design are the below circular pads on the inside / outside of the knees. These circles are not part of Leoric's books and so don't really make any sense as to what they are meant to be.
Leoric's boots are pretty plain and smooth, as are his gloves (which has creases moulded into them)

Leoric has what is probably the best weapon of any of the Visionaries toys, a whip made from soft rubber. The original design for this was a hard whip moulded into a curves shape. This can be seen in some of the Hasbro product catalogue images.
Leoric’s helmet is made from a soft rubber rather than plastic, which is the only example of this in the series one toys. The helmet is sculpted nicely and, due to the soft nature, can be held under arm against his body. It is a little thick and bows out to the sides, but I do like this helmet.

Leoric’s hologram is that of a lion’s face, representing his animal totem of the lion. The hologram isn’t the clearest, though it’s a decent size and takes up pretty much all of his chest plate. The same can’t be said about the owl hologram that adorns Leoric’s staff, representing Wisdom. The owl is an amazingly detailed piece of holography, covering most of the hologram sticker, and showing detail which includes feathers on the owl. In my opinion, this is one of the best (if not the best) staff hologram in the series one Visionaries line.

Leoric is a fair representation of the character shown in both the cartoon and comic series, although in the cartoon series Leoric only has one of the studded straps on his arms. 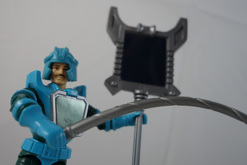 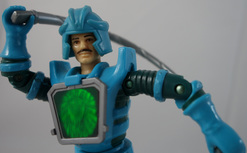 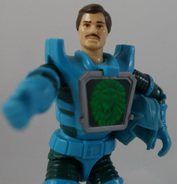