Magical Rhyme: "Wings of steel shall ride the breeze, invade the air, the land, the seas!"

Mortdredd comes with the Sky Claw (which has its own gallery) so I’ll just be talking about the Mortdredd figure here. Mortdredd has a really nice light blue and purple colour scheme, with quiet a good mixture of the two colours. Mortdredd’s animal totem is that of a scarab beetle, and this is represented by the plates on the arms and shoulders of the toys armour.
The leg armour looks pretty nice and more like Japanese samurai armour which straps on rather than knight’s armour. His helmet had an interesting design, with a narrow eye slot (though still moulded in). This eye slot isn’t painted and it is still a shame that the Darkling Lords don’t the eye slots.
Mortdredd comes with a scythe, which is nicely moulded in gold plastic. Although slightly oversized as a weapon, it’s pretty nicely done and is instantly recognisable as a type of weapon.

Articulation wise, Mortdredd has complete 360 degree rotation at the shoulders, and as his armour is fairly flat there is nothing to limit the points of articulation of the figure. Some of the images show Mortdredd with Darkstorm showing some of this articulation.

Mortdredd is the second Darkling Lord to feature grey hair and blue eyes, along with Cindarr, and is meant to be the eldest of all of the Darkling Lords. His hologram, the beetle, is a fair size but isn’t very clear on the detail (though that may just be damage to our original toy).
As well as our loose original figure, we also have a sealed figure in the bubble which comes with the Sky Claw. This Mortdredd toy, as well as the engineering pilot of Darkstorm, were both purchased by us from the head of Hasbro UK (during the 80s). We believe that the figure is a standard release toy, but he may be an e.p. or pre-released figure. 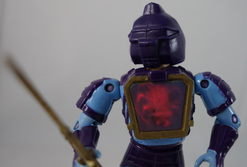 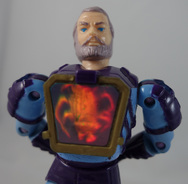 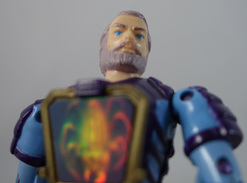 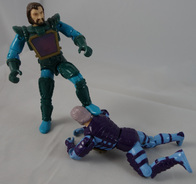