Magical Rhyme: "By natures hand, by craft, by art, what once was one now fly apart!"

Cindarr is the strong man of the Darkling Lords, though for some reason the sculpting on the toy does nothing to indicate this. The figure has no muscle definition to speak of, as his arms are thinner than Cryotek. OK, Cindarr isn’t He-Man, but he should have something to indicate that his strength and power are what Merklynn based Cindarr’s animal totem and magical power on.
Staying with the moulding, Cindarr has little detail on his upper body, though the legs have hexagonal patterns on them. He has short shoulder pads, which means the figure has pretty decent articulation on the shoulder joints, though like most of the Visionaries toys is limited from having a full 360 degree rotation.
Cindarr’s helmet is a bucket design, but fits pretty nicely. The prototype figure had a clear visor section, so you could see the characters face, whereas the final release figure has a black visor.

Cindarr’s weapon is that of a club (we are missing are loose version) and is one of the nicer weapons in the Visionaries line. It’s not fancy, but it works and looks nice. His staff feature a symmetrical design with spikes on the outside of the staff. The hologram on our original version is incorrect, rather than coming with the Destruction hologram, Cindarr came with the Decay hologram.

Cindarr’s colour scheme is that of a browny-red and black. The colours are quiet matt in colour, compared to the gloss of figures like Darkstorm. Although not the brightest colours they work pretty well. Cindarr features a grey beard and hair with blue-eyes (usually the Visionaries toys have one colour for their eyes and hair.
Cindarr’s hologram is that of the gorilla, featuring the animals head and part of a shoulder, at an angle. It’s a pretty nice hologram and takes up most of the chest totem. I am unable to comment on the Destruction hologram on the staff as our Cindarr toy does not have the correct hologram sticker.

For some reason Cindarr is the hardest Visionaries series one figure to find hardest. We purchased a collection of carded Canadian dual-lingual figures, but Cindarr was noticeable by his absence. This trend seems to be pretty similar on other carded collections and sales, though we are not sure why. It may be that Cindarr was originally short packed (or like our original Cindarr, the toy suffered from manufacturing issues and has the incorrect hologram sticker on his staff. 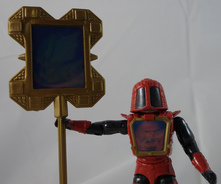 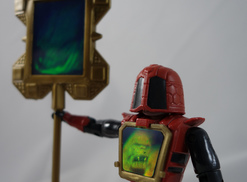 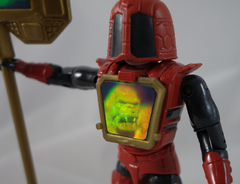 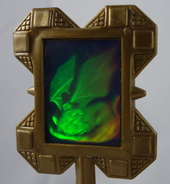 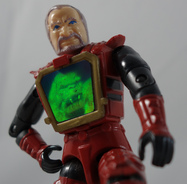 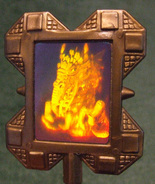 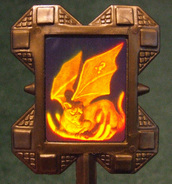