Magical Rhyme: "Flay the flesh, lay bare the bone. Upon this field, let grief be sown!"

Reekon comes with the Dagger Assault, the largeasst of the Visionaries vehicles and his brown and yellow colours mirror that of Feryl, the pilot of the second largest Visionaries vehicle. < br />
As Reekon comes with a vehicle he only has one weapon, and no staff. His weapon of choice is that of a sword, or an edge-ribbed sword as the toy's box describes it. His hologram is that of the lizard and one of, if not the, smallest holograms to be featured on a Visionaries toy. The lizard is also one of the few holograms to show the entire creature rather than just the face.

Reekon has some nice sculpting details on the from the chain mail molding on his arms and legs, through the shin and forearm guards and onto the square, and fairly chunking chest plate and shoulder pads. Reekon also sports the larges helmet of any of the visionaries, with the back covering his entire neck. It is also fairly wide and made of thick plastic.<

The design of the helmet is quiet interesting and reminds of of Bavarian workmanship It would be intereting to know what, if anything, Reekon's helmet is based on.

Going back to the chest and shoulder pieces, Reekon has some chunky spikes on the shoulders and small rivits around the best piece, Of all of the Visionaries series one sculpts, his has the closest resemblance to actual armour.

The large shoulder pads, which are extremely thick, limit the movement of Reekon's arms, although not as bad as Cravex. His hologram has always appeared blurry to us, though that may just be our version. Reekon also sports a goatee beard (brown in colour). He is the only series one Visionaries character with a goatee <\p> 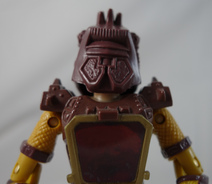 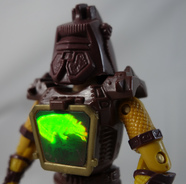 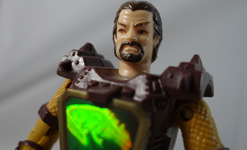 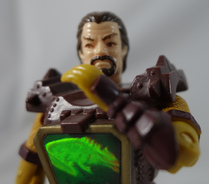 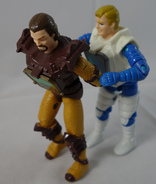 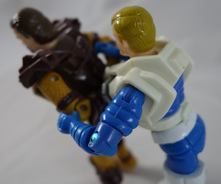