So, we come to the end, the final issue I the five-part Transformers vs Visionaries books from IDW Publishing. This issue starts with a monologue from Leoric as he enters New Prysmos, with the help of a reformed Cryotek. The pair quickly dispose of Craggor (always nice to see a series two character) before Leoric converts Cryotek’s armour back to Spectral Knights blue.

The scene then jumps to Witterquick and Mortdred, who are still captured. Leoric arrives and frees his old colleague, leaving Mortdred behind.

We jump again, this time to the Planetary Control Core where Galadria is seen trying to stop Arzon from destroying the bomb. As it turns out Arzon's attack does no damage to the bomb and was pointless. Wheeljack informs Galadria that they need to move the bomb closer to the Talisman for it to work. Galadria says she will take care of the Darkling Lords whilst the Transformers attend to the bomb.

We jump back again to Leoric, still going through his monologue, as we see him convert some of the Darkling Lords (including some series two characters) to the Spectral Knights. These include someone who has Lexor’s power (or it could be a triceratops), another male (looking like the new Lexor), Braxe, Ramak, two female knights and some other males.

We jump to Merklynn’s chambers where Virulina is getting frustrated that they have lost the Spectral Knights. Leoric enters ready to attack as Virulina calls in backup, in the form of Waspinator.

Waspinator attacks Leoric before Virulina gets involved using her magical rhyme to poison Leoric. (Note the rhyme has been changed). However, something goes wrong and she also ends up affected by her spell. Merklynn then reveals his plans to have Arzon rule the Visionaries.

At this point we jump back underground as Galadria fights off Cravex and Lexor whilst Ironhide plants the bomb. During which the energy from the Talisman starts to rip Ironhide apart. Galadria uses her rhyme (again slightly changed) to both heal Ironhide and trigger the bomb (which gets converted to a healing bomb).

We jump a week to find Leoric and Virulina healing up, Galadria is visiting Leoric eager for him to look outside the window. To his shock he seems animals and plant life, on the robot world of Cybertron! Galadria explains what happened and that there is a hundred square miles of lush plant life on the planet now.

We then jump back to the Transformers, seeing Waspinator and Ironhide having a check-up, the latter showing no signs of damage. Ironhide cracks a joke and Tankor before we jump back again to New Prysmos. We see Leoric making up and forgiving Arzon before we jump again to a prison. Here we see Cindarr bringing refreshments to Merklynn. He is still loyal to the wizard and wants to free him. Merklynn is not interested though, as he has seen the future and it is death ... in the form of Unicron. 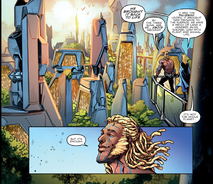 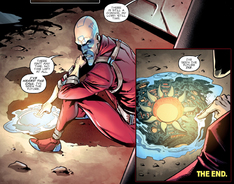 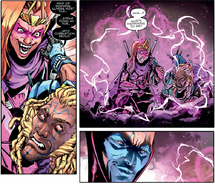 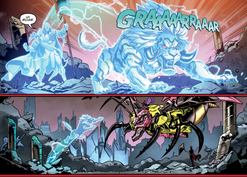 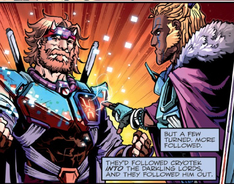 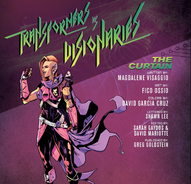